We all know the player.

The class, the power, the deft touch, the brute force, the tattoos, the medals, the success.

But we’re all trying to crack the code of what sort of bloke he is.

There is a perverse desire (among some of us) to truly understand what makes Dustin Martin tick.

Former Richmond assistant coach Justin Lepptisch has more clues to cracking the ‘Dusty’ code than the rest of us after spending years getting to know the man.

“He’s one of the most respectful people I’ve ever met,” Leppitsch told SEN.com.au.

“He’s not aloof at all. He might come across that way publicly.

“I live down in Mt Eliza and he’s always wanting to bring players over, come for dinner, he’ll kick the ball with the kids in the backyard, he’s that sort of guy.

“I think that really is his family.” 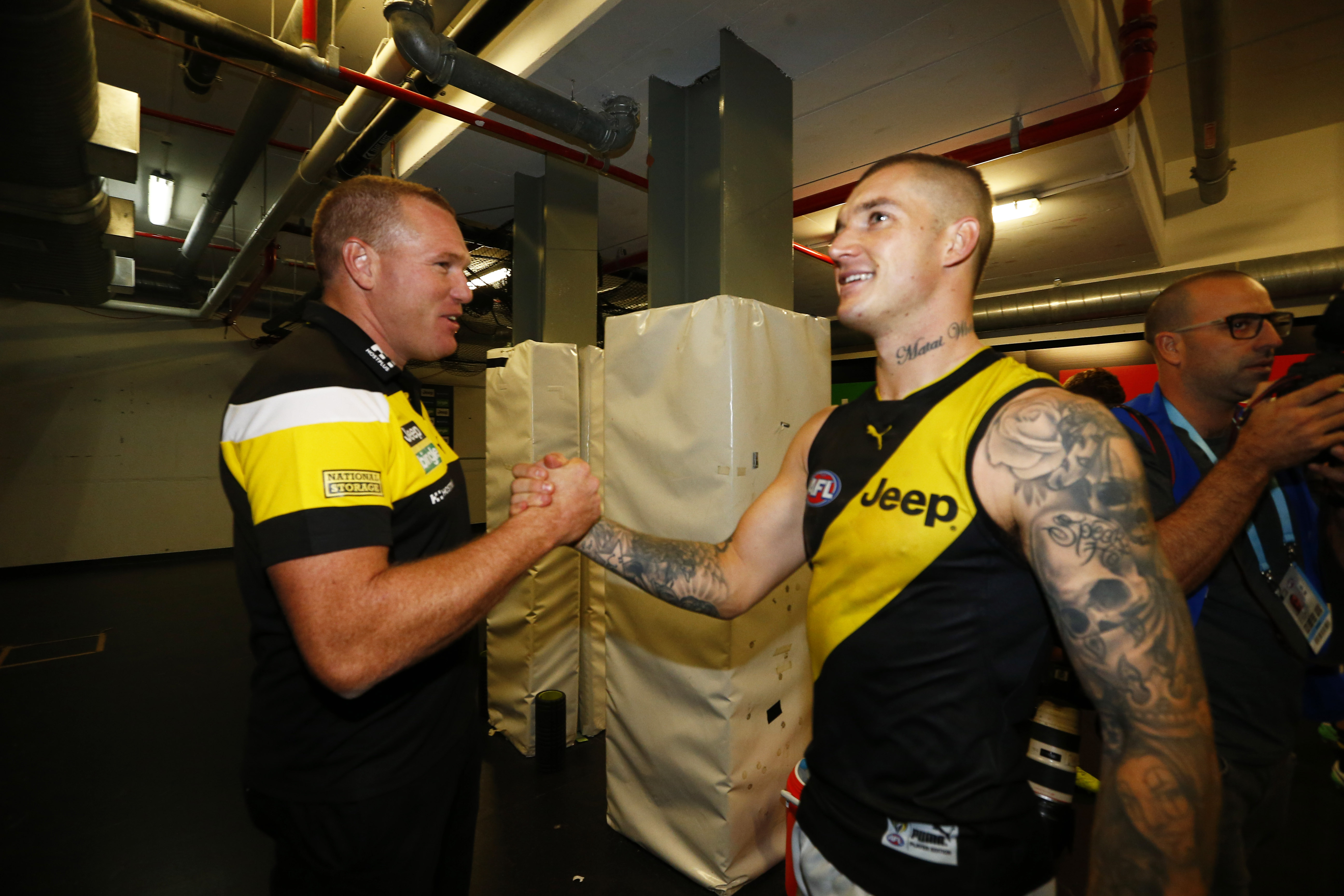 On Saturday night when Richmond graces the hallowed turf of the MCG, Martin will join elite company.

At the age of 29, Martin becomes the 25th youngest player and the 11th fastest in the history of the game to reach the 250-game milestone.

It has taken him a little over 11 seasons to join the likes of Andrew McLeod, Chris Judd, Michael Voss, Matthew Pavlich, Gary Ablett Junior, Scott Pendlenury and Mark Ricciuto as one of the youngest to 250, missing only eight games over the journey.

With this feat in tow, Martin could easily have his head in the clouds, but the Tigers superstar possesses a down-to-earth humility that has him seemingly on the same level as his peers.

An example of this is that he is fiercely loyal to those closest to him.

“The people close to him he cares a lot about and he cares what they think,” Leppitsch added.

“The people outside of that, he doesn’t care at all. So if he was getting public pressure for a certain person he should or should not be hanging out with, he couldn’t care less.

“That’s his mate, they’re loyal to him and he’s loyal to them. He’s a very loyal person like that.”

As long as enjoyment is a motivating factor, Martin will continue to flourish.

He loves a joke. In fact, he lives for it. He endures the mundane side of the game just to get a taste of it.

“One thing about Dustin is he loves the fun of the game,” Leppitsch said.

“Whenever there’s a team meeting and we go through all the ‘boring’ stuff, at the end there’s a bit of fun. It could be a gag or some funny footage, that’s his favourite part.

“At the end of each meeting, ‘Dimma’ (coach Damien Hardwick) would have some of those moments on the screen. It was like the only reason Dustin would turn up to that meeting was to wait for that part of it.

“That’s when he stands up to attention and he’s rubbing his hands together. He’s always waiting for those moments.

“Whilst he loves being a professional athlete and the combative part of it, he loves the fun just as much.” 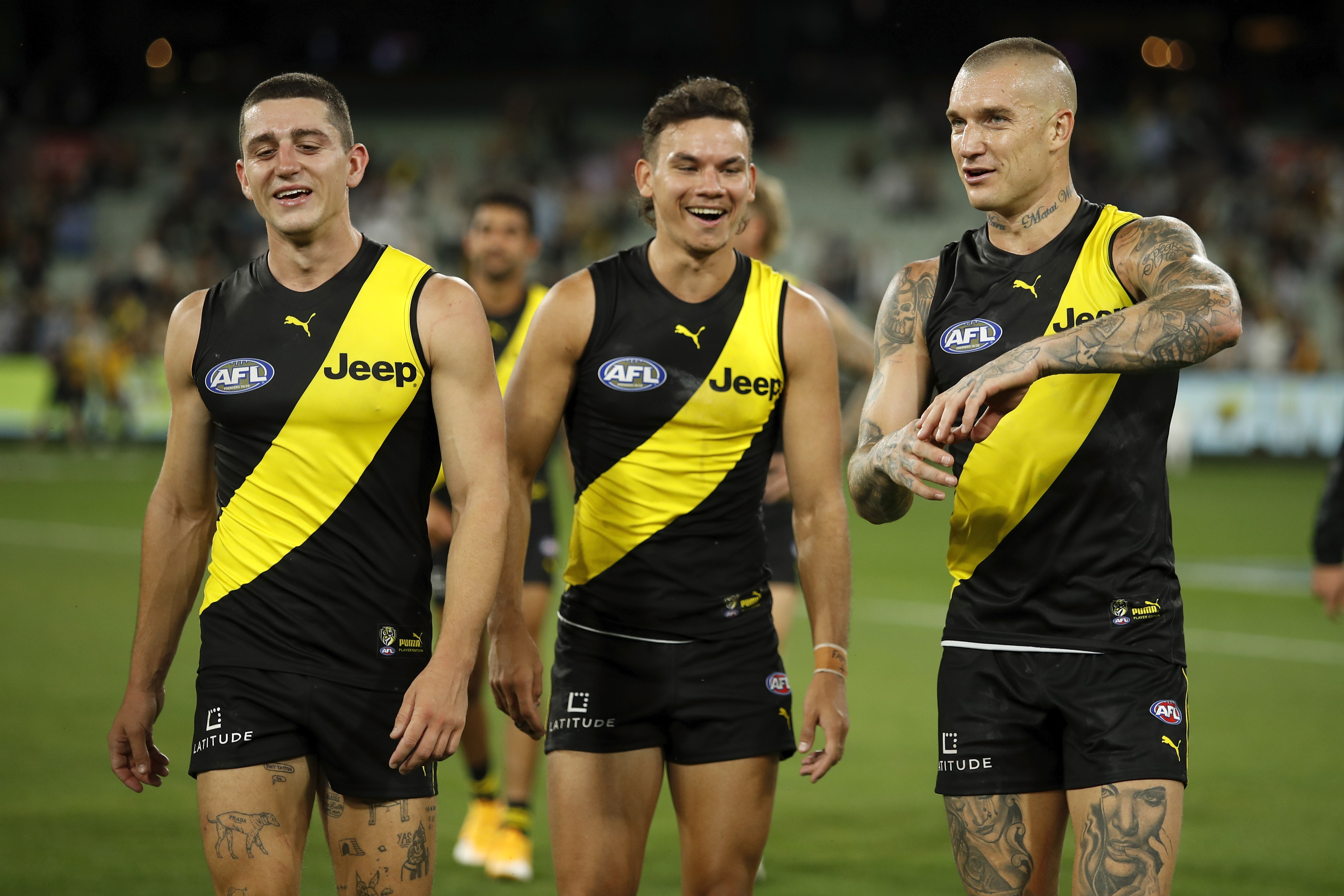 Richmond captain Trent Cotchin even attempted to crack the code back in the early days before simply embracing his perceived differences with Dusty.

There were some instances when the now superstar perhaps played up or was slightly out of line, but he is now a model citizen in his skipper’s eyes.

“Seeing his highlights even before he trained his first session we knew he was a pretty impressive and unique player,” Cotchin said.

“I have written about my first impressions of him and that you should never judge a book by its cover, but I probably did.

“Since that moment I’ve learnt so much about him and even though from afar we look like two totally different people, we’re very similar in many ways.

“We continue to learn and grow our friendship and I’ve just been really impressed with his journey since being at the footy club.”

There is further intrigue to the Martin story. He came to Melbourne from Castlemaine after he was drafted in 2009.

His first stay with a host family didn’t quite go to plan but he soon found refuge at the home of former president Gary March.

It is that recurring theme of family, with his father Shane first interstate and now in New Zealand, that Martin always clung to.

“We really bonded well with him,” March said on SEN Breakfast.

“We still see him quite regularly. We’re hoping to have a family dinner in the next couple of weeks.

“He was really misunderstood. With his shyness, people maybe felt he was aloof, but that couldn’t be further from the truth.

“He was just a young boy that needed some stability around him. His dad was living interstate at the time. We were able to provide that for him.

“It’s been fantastic to see him evolve as a person.”

As for the fun side of Dusty, it was clearly evident, particularly in the early days.

“It was probably more a problem when he bought home the likes of Jake King and the late Shane Tuck,” March added.

“They could run riot at our place occasionally."

After an indifferent beginning, the intrigue surrounding the real Martin has grown immensely over the past decade.

So too has his reputation as a big-game player who is now at the peak of his powers and sitting firmly in the top echelon of Tigers.

“I didn’t quite expect him to get to the heights that he has,” March said further.

“We always knew he would be a 200-plus game player, but I didn’t think he would be quite the player he has become.

“I’ve followed Richmond for 50 years and for me now, he’s clearly our greatest ever player.”