The 2017 National Draft is proving to be a deep pool of players filled with x-factor and talls aplenty.

The cohort is in its fourth year in the league and starting to mature from youngsters to fully fledged contributors.

SEN’s Bob and Andy have been keeping a close eye on the fourth year players, ranking their performances weekly.

At the top of the draft, Fremantle nailed their pair of picks, with Andrew Brayshaw and Adam Cerra among the best performing midfielders.

Brisbane would be happy with their three selections in the top 20 as well, as Zac Bailey has gone to the next level this year as a damaging half-forward, while Brandon Starcevich has emerged as a lockdown defender.

Top pick in the draft Cam Rayner looked ready to explode before a torn ACL quelled his progress in the pre-season.

Bailey has rocketed up the re-draft board this year, booting 17 goals and averaging 17 disposals per game across the season.

SEN’s David King is an enormous fan of the young Lion.

“I think we’ve seen a lot of growth in those players around the edges and I keep coming back to Zac Bailey,” King told SEN’s Whateley.

“I think he’s the next wildcard All-Australian type player and he could just go to the pointy end of the elite. He’s 21 and still very young.”

West Coast’s two picks in the 20s are established stars in Liam Ryan and Oscar Allen. Adding Tim Kelly to that mix from Geelong gives a tidy trio.

A few rookies also make our best 22. Richmond found a gem in Liam Baker, while Collingwood picked up Brody Mihocek.

At the other end of the spectrum, Carlton had two picks inside the top 10 in Paddy Dow and Lochie O’Brien and neither make the side. If you were to re-rank the top 10, they would come in at the bottom given the quality otherwise.

The Blues did find a ruckman of the future at pick 30 however in Tom De Koning.

In a re-draft, it would be the key position players swiftly taken off the top, alongside the likes of Kelly, Ryan and Brayshaw.

Western Bulldogs star Aaron Naughton as well as Allen and Mihocek would be heavily sought after as forwards.

James Worpel was the first of the draft class to win a best and fairest, doing so at Hawthorn in 2019, but he has plateaued since.

We’ve re-drafted the top 15 based on the output of the players so far and with a thought towards future development. 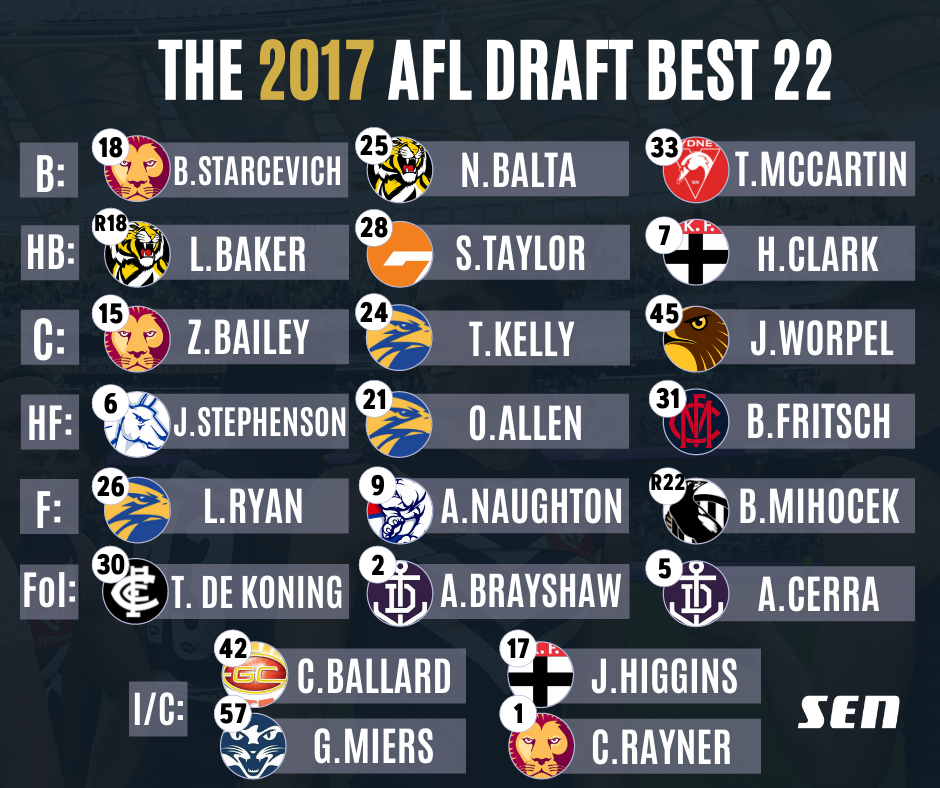