Another turbulent yet brilliant weekend of footy and what better time to drop the latest Free Kick Ladder.

Remaining at the top of the mantle is the Western Bulldogs who have received the equal second most free kicks for (323) and given away the fewest (257) for a differential of +66.

The Dogs are well clear of second-placed Carlton who they share 323 frees for with. The Blues have erred a few more times, however, and hold a differential of +39.

Adelaide has been awarded the most free kicks (34) after 15 rounds to sit third on +29.

Making up the top five is Melbourne on +22 and Collingwood on +18.

Geelong comes in at six with a +8 differential, GWS is seventh on +4, while Brisbane (+2) and Fremantle (+1) are the other clubs in the black.

Down the other end and it is Richmond and then daylight.

After being on the wrong end of a lopsided 26-13 count in Saturday’s loss to the Cats, the Tigers have received the least free kicks (271) and have given away the most (343). Their differential is -72.

The closest team is St Kilda, who conceded 27 frees and received just 12 against Sydney, and now have a -29 discrepancy. 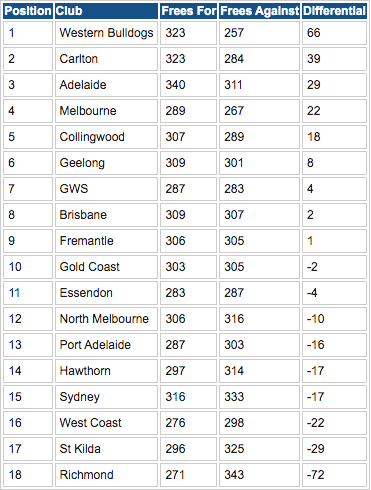 Note: Hawthorn’s Dylan Moore has a massive free kick differential of +27 with 30 frees for and just 3 against.

We’ll be back later in the season for yet another Free Kick Ladder update.